To make it the active view (or one of two active views), click on the Primer Design tab (

The Primer Design view lets you design and analyze primers for a nucleotide sequence. Data in the Primer Design view appears in a header (featuring tools and details about the primers) and three distinct panes below that header. See Work with Primers for detailed information about performing tasks within this view. 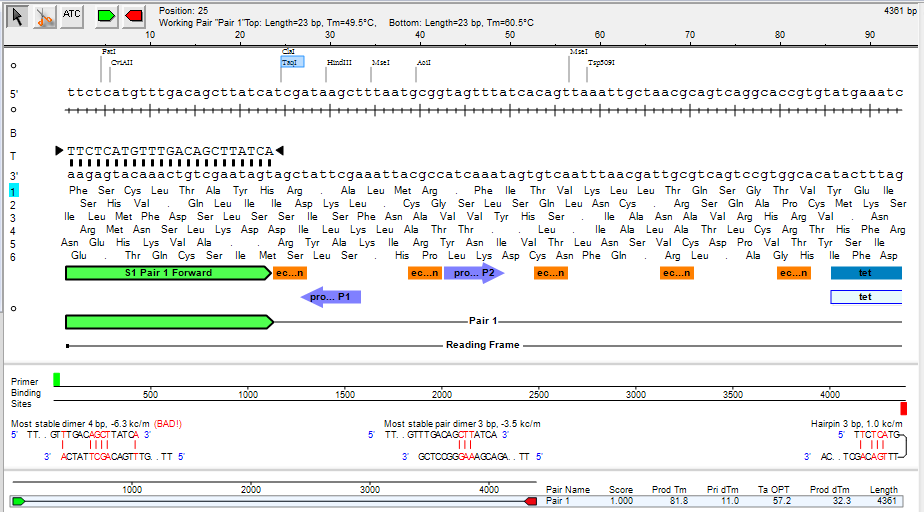 Sequence details in the header:

Details about the primers, if any, are displayed in the header of the Primer Design view, just to the right of the tools.

Displays the base level nucleotide sequence, restriction sites, translations, and features, as well as the currently selected primer sequence. This pane can be used to modify your primers.

Once you have done this, a green arrow represents the forward strand primer; red indicates the reverse strand primer. Primer sequences are displayed in 5’ to 3’ orientation, and include modifications that you have made. Edited nucleotides appear in lowercase.

Shows primer binding sites, and the most stable conformation of dimers, pair dimers, and hairpins, if they exist. As the current primer pair is changed, the information displayed in the Mispriming Pane is updated automatically.

Beneath Primer Binding Sites, the most stable conformation of dimers, pair dimers, and hairpins are shown, if they exist. To calculate this, SeqBuilder Pro locates secondary structure interactions using the nearest-neighbor model for all three types of duplexing. For self and pair dimer duplexing, oligonucleotide sequences are compared at every potential overlapping position by aligning sequences and advancing one residue at a time.

*Note: If the word BAD! appears in red, it indicates that the final pentamer value of the dimer exceeds the 3’ pentamer stability threshold defined in the Primer Characteristics section of the Create Primer Pairs dialog. The Ignore Duplexing n bp from 3’ parameter also affects duplexing. Avoid using primers with dimers or hairpins labeled “BAD!” unless you have experimental evidence that they will function as desired, or if you have no other option.

Displays the list of primer pairs discovered by your search, along with additional information for each pair, including product length, melting temperatures, and a quality score. The following information is displayed in columns for each pair: