In this tutorial, you will de novo assemble fourteen short trace sequences from PE Applied Biosystems, Inc. and then analyze the resulting contig in SeqMan Ultra.

The following video illustrates the tutorial steps below it.

*Note: To learn about a faster way to run a Sanger assembly, see the Run button description in the SeqMan NGen User Guide topic Navigate between wizard screens.

Examining the alignment in SeqMan Ultra: 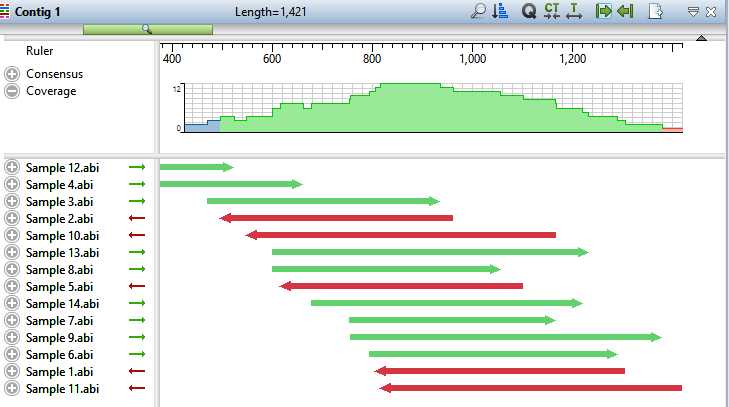 The Coverage graph has areas of blue, green and red. Blue indicates single-direction coverage, while red shows single-read coverage. Green denotes coverage on both strands; the height of the histogram corresponds to the depth of coverage.

During assembly, SeqMan NGen trimmed ends for the constituent sequences based on trace data quality and presence of vector. Although sufficient data remained to assemble the sequences into a single contig, there are cases when restoring some of the trimmed data may allow SeqMan Ultra to join multiple contigs into a single contig. You may also wish to restore data in order to verify the consensus in a low-coverage area.

To reveal the trimmed trace data, grab the black triangle to the left of the sequence and drag it to the left. Trimmed sequence appears with a yellow background by default. Conflicts between the restored data and the consensus are shown via red text.

If you thought the trimmed ends merited being kept in the alignment (they don’t in this case), you could have used the command Contig > Extend Trimmed Ends > Extend and Align 3’ and 5’ Sequence Ends to both extend the ends and reassemble the reads.

This marks the end of this tutorial.