To access the dialog, use Project > Project Parameters. If the Consensus section is not already active, click on the word Consensus on the left. 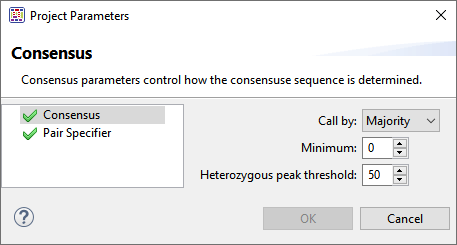 In the Call by drop-down menu, choose between Majority and Trace evidence. In the Minimum box, enter an integer as described below.

In the Minimum majority percentage box, enter the minimum percentage of a called base in a column to consider it the majority. The default is 75.