The trace data for a DNA sequence comprises four sets of traces—one each for A, C, G, and T. Each trace contains a sequence of intensity values that can be plotted to form a graphical display of trace data. The portions of the four traces associated with a single base call each contain about ten to twelve data points. Only the trace from which the base call is derived is used to calculate a quality score (e.g. if the base call is a T, only the T trace is analyzed to calculate a quality score). The figure below shows data plotted for five base calls. The data points associated with the center base—a T—are marked with black dots. 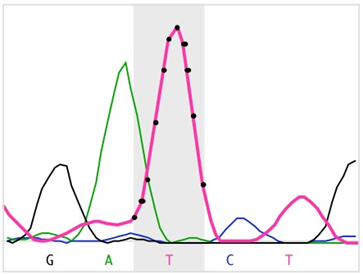 SeqMan Ultra calculates each of the peaks in the trace data. A peak is defined as trace data that exhibits negative curvature. Slope is used to differentiate between three kinds of peaks: strong, medium, and weak. Strong peaks exhibit a change in the sign of the slope, medium peaks contain a shoulder with a slope of zero, and weak peaks have neither a change in sign nor a shoulder. If the trace data for a base call do not contain a peak, its quality score is zero. The figure below contains examples of the three kinds of peaks for the highlighted T base.