This part of the tutorial demonstrates that if you don’t have annotations to rely on for validating multiple alignments, a pairwise alignment is a good alternative.

This tutorial uses a default MUSCLE alignment of the Drosophila melanogaster ADH gene and the mRNA transcripts for isoforms F,C,E and H. In this example, some of the annotations of the original GenBank entry, NT_033779.5, were removed for the sake of clarity.

To begin the analysis:

The Overview for this alignment is shown in the image below. (Click on the image to make it larger.)

In this example, the transcripts, represented by the four lower sequences, have already been arranged in the same vertical order as the mRNA-features for the ADH gene, represented by orange arrows in the upper sequence.

As expected, there is a good correspondence of the aligned regions of the transcripts to the exons of the gene. But a closer examination reveals a few problems, one of which is indicated by the red boxes in the image above. Notice that that isoF and isoC are annotated to code for Exon I (box A), which matches the multiple alignment result. However the 5’ end of isoH and isoE are also aligned, somewhat poorly, to this exon. How can you tell? Note that there are only two yellow arrows in box A, but there are green bars in all four transcript rows for box A, the bottom two of which are much sparser than the others This part of the lower two transcripts — which have no corresponding yellow arrows — should really have aligned with the start of Exon II (box B).

As a reminder, the example above used the MUSCLE alignment method. Before testing whether or not pairwise alignment can resolve this problem, check out how some of the other three multiple alignment engines handle these particular sequences. 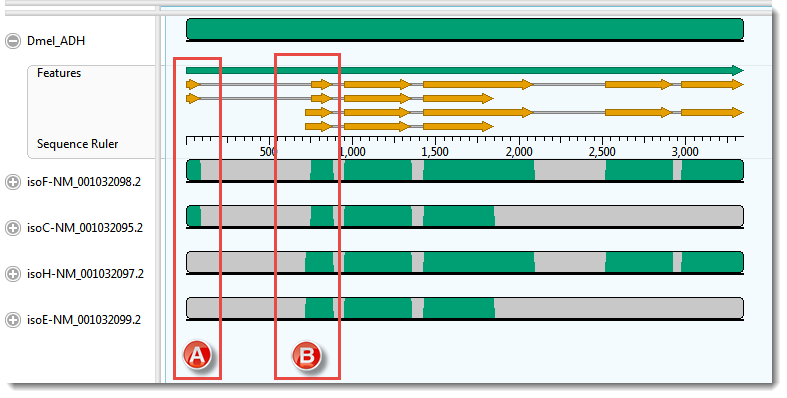 Proceed to Part B: Use a Local pairwise alignment method.