Regardless of your scientific discipline, transcriptome projects can be complex. In this post, DNASTAR’s Manager of Sales and Client Support, Carl-Erik Tornqvist PhD, will answer some common questions about RNA-Seq analysis, and especially those pesky normalization methods.

Because we’d like this post to be a resource to students and researchers of all backgrounds, Carl-Erik will use the first half of this post to answer general questions about how RNA-seq data differs from genomic data. In the second half, he’ll provide an in-depth look at RNA-seq normalization methods.

Jump to Part I: Where does RNA-Seq data come from, and how is it assembled?

Jump to Part 2: What do I need to know about RNA-Seq normalization?

Part I: Where does RNA-Seq data come from, and how is it assembled?

A genome is the DNA sequence that includes gene encoding and non-encoding sequences. The sequence is a blueprint for all genes that may be expressed. With genomic data, you can see the gene sequences and any variants between samples. However, there’s no information about the expression of genes.

By contrast, a transcriptome contains the gene encoding sequences only. A transcriptome is a snapshot of the expressed genes, through sequencing of cDNA (from mRNA), under the conditions in which the biological sample was isolated. Transcriptome data does not contain all RNA. Instead, only those sequences that form transcripts—the mRNA sequences—are isolated for further study. 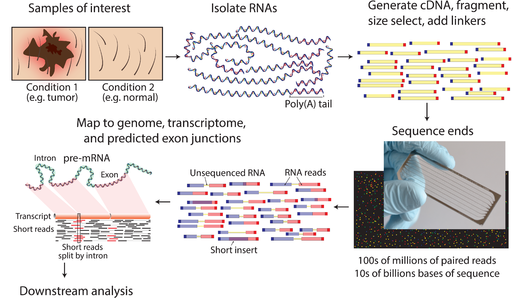 In the lab, how does collection of RNA compare to that of DNA?

Due to the fragility of RNA molecules, RNA extraction requires enhanced sterile and decontamination procedures compared to DNA extraction. With RNA extraction, the genomic DNA is purposely degraded using the enzyme DNase, whereas any trace of RNase must be removed and prevented.

Who does the sequencing? What format are the resulting files saved in?

Usually, a sequencing core facility or company will perform the sequencing, which may also include preparation of the sample libraries. Depending on the instrumentation, sequence read length, and number of samples, a sequencing run can last from less than an hour to several hours. The cost per sample can be reduced by using “multiplexing” to mix multiple samples in a single sequencing reaction.

Typically, the sequencing facility also performs post-processing of the sequencing data. This includes things like adapter removal and demultiplexing.

The post-processed sequences are saved as .fastq files, with paired-end data having two .fastq files per samples, denoted by the letters “F” and “R” in their filenames. A nice open-source software utility that allows you to see the quality of the sequences in a .fastq file is called FASTQC. With FASTQC you can see useful summaries of the data such as number of reads and average read-depth.

Why is de novo RNA-Seq assembly called “transcriptome” assembly? How does it differ from reference-based assembly?

Reference-based RNA-seq assembly aligns sequencing reads to a reference or template sequence. In DNASTAR’s SeqMan NGen application (image below), this is the RNA-Seq workflow listed under “Quantitative Analysis.”

Using the following 2-step procedure, you can even use the same data set for both reference-based RNA-seq and de novo transcriptome:

1) Use the reference-guided RNA-seq workflow, then check the results (e.g., using DNASTAR’s SeqMan Ultra) to see which reads were unassembled. These reads are considered “novel” transcripts because they were not present in the reference sequence.

2) Assemble the “unassembled” reads de novo to see what additional transcripts are present in samples.

If I decide to run a reference-guided assembly, where do I get the template?

A template can be downloaded for free in any of the following ways:

* Use the Download Genome Package button to choose from DNASTAR’s curated and up-to-date genome template database.  This is the preferred method for those working with model organisms, especially human, as the genome template packages are annotated with dbSNP and dbNSFP information, allowing users to perform variant analysis along with RNA-Seq gene expression analysis.

* Use the Download Genome Package button to choose from DNASTAR’s curated and up-to-date genome template database.  This is the preferred method for those working with model organisms, especially human, as the genome template packages are annotated with dbSNP and dbNSFP information, allowing users to perform variant analysis along with RNA-Seq gene expression analysis.

If I follow the de novo transcriptome workflow, how can I recognize which transcripts are known and which are novel?

By comparing the found transcripts to those on NCBI’s RefSeq website. As a shortcut, DNASTAR’s SeqMan NGen provides a Transcript nnotation Database checkbox in its assembly wizard.

After checking the box, licensed users can choose from DNASTAR’s database of transcript annotations extracted from NCBI’s RefSeq database.

When setting up an RNA-Seq assembly, what can I do to ensure a clear signal in my RNA-Seq data?

Sample preparation is key. When you extract RNA from a sample, you collect the RNA from all sources present in that sample. If there is a known source of unwanted RNA in your sample, you can use contaminant scanning in the assembly to filter out the unwanted RNA sequences.

For example, if your sample is from a plant leaf, could that plant possibly have a virus? If your plant sample contains viral RNA and the sequence of that virus is available, some assembly software may allow you to automatically scan for the viral sequences and remove those reads prior to assembly, as DNASTAR’s SeqMan NGen does (see image). Also, ensuring that the total amount of isolated mRNA from each sample is equivalent will allow you to use more normalization approaches.

Assembly software like SeqMan NGen also allows you to remove universal adapter or scan for specific vectors/adapters prior to assembly.

Part 2: What do I need to know about RNA-Seq normalization?

Which normalization methods are offered in ArrayStar and SeqMan NGen?

Regardless of whether you are using SeqMan NGen or ArrayStar, you will use a drop-down menu to choose from available RNA-Seq normalization methods.

For an in-depth discussion of normalization methods available, see the user guides for SeqMan NGen and ArrayStar.

From the normalization methods available, how do I choose the best method for my data?

It depends on what you know about your data. If you know that the total mRNA per cell is equal, then normalization based on library size (e.g. RPKM) is an acceptable approach and can tolerate asymmetry in the differential expression, that is different numbers of genes can be up- or down-regulated across different conditions/samples.  However, determining the amount of mRNA per cell is not an easy task, and this calculation is usually not performed.

Also, note that RPKM is not a good method for comparing between samples. It is best to use RPKM for within-sample comparison of different genes.

For experiments in which the total mRNA per cell is not equal among samples, then normalization by read count (DESeq2; edgeR) is an acceptable approach. However, normalization by read count performs poorly when there is a high degree of asymmetry in the differential expression across conditions/samples. Again, for the methods above, you will need at least two replicates per sample and one sample will need to be designated the control.

When might I NOT want to normalize my RNA-Seq data?

It is always good practice to normalize your data, however, if your data does not meet the assumptions that need to be met for a normalization approach, then you would not want to normalize the data and would choose None from the drop-down menu.

How can I tell if I chose the “wrong” normalization method? Are there any tell-tale signs when I’m doing downstream analysis?

Want to see these workflows in action? Watch a recording of our September 2020 webinar with Dr. Carl-Erik Tornqvist.

Ready to try Lasergene’s RNA-Seq workflows for yourself? Download a 14-day free trial or visit our workflow page to learn more.

Would you like to receive technical tips and special offers straight to your inbox? YES, SIGN ME UP!